Kaveri river water sharing dispute has cropped up again. A small crisis once in every three to four years and a slightly bigger crisis once in a decade has been a regular affair in this dispute. Here is an attempt to go into the history of this dispute and take a holistic view of the problem and the kind of solution needed.

Kaveri, a life line of Karnataka and Tamilnadu !
Tamilnadu has been arguing that it has prescriptive right over the flows of river Kavery on the ground that it is the lower riparian State and hence has a right of prior appropriation of the waters of it. It laid claim on the principle of right of easement saying that they have been enjoying the flow of that river for centuries and their economy is heavily dependent on such flows as such there is no question of interrupting the flow of such river by the upper riparian State. It has been using these arguments to pass the message that upper riparian state has no right over Kaveri river water. Going by this argument, no state including lower riparian state can build any dams  across any river for that matter ! If left as it is most of the river water would go waste flowing down into the sea. Storing river water plays a vital role in the progress of human society and hence both lower as well as upper riparian states have due rights to store water. With that comes the question, who can hold what amount of water? how much the upper riparian state can hold for itself and how much should be the share of lower riparian state? how should it be shared in times of lean season? All these questions need to be answered in a fair and just manner. If such a formula is already in place, no water related disputes will ever arise, but when political clout, unfair laws of the past decide how water will be shared between these parties, injustice is a given to all weaker parties involved. In the matter of Kaveri river water sharing, Karnataka has been experiencing injustice for more than a 100 years. How did we land up where we are now? How do we resolve this? 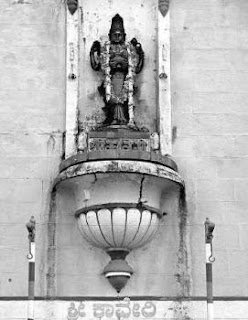 Although the conflict has a long history, let's look at two key developments that had important implications on this conflict. Firstly, the political upper hand Madras presidency enjoyed under the British over the Mysore kingdom. Secondly, the technological and scientific revolutions that led to the building of dams and canals and the consequent increase in the area of irrigation in the Kaveri basin. In 1892 and 1924, two separate treaties were signed between the Mysore kingdom and the Madras presidency under the British. To be honest, the state of Mysore was co-erced to sign those treaties that were heavily biased towards the british ruled Madras state. State of Mysore was hoping that after India's independence and India becoming a federal democracy formed on the foundation of equality for all; all the unfair agreements of the past will be buried and a fair and just way of sharing water would be put in place that would be acceptable to both the states, but that wish never came true. The tradition of injustice continued with the formation of Kaveri tribunal in the 90s and it's interim judgement in 1991 and it's final judgement in 2007.

Can any court give solution to such a conflict? Does river water sharing come under the jurisdiction of the Supreme court? Or, Should it come under it at all? Can agreements of colonial era or historical claims become basis to decide river water sharing ? On what basis did the tribunal give it's interim and final judgements? On what basis is the Prime minister of India asking Karnataka to release water? On what basis the supreme court is asking Karnataka to honour the CRA's decision? we'll discuss these questions in the future posts.
Posted by ವಸಂತ at 10:56 ಅಪರಾಹ್ನ