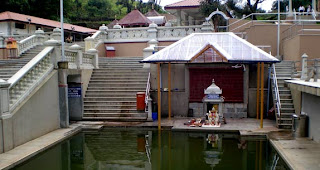 The river Kaveri starts her journey from Talakaveri in Kodagu district and runs more than 800 kms in her journey to Bay of Bengal. Hemavathi, Suvarnavathi, Arkavathi and Shimsha are tributaries of river Kaveri in Karnataka. Kabini is another tributary that originates in Kerala and joins Kaveri in Karnataka (KA). In Tamilnadu (TN), Bhavani, Noyyil and Amaravati are three tributaries of it. Kaveri flows a length of 320 kms within Karnataka, for 64 kms it’s flow acts as border between Karnataka and Tamilnadu, while after that it flows for about 416 kms within Tamilnadu before emptying into the Bay of Bengal.

A bitter reward for being patriotic!
British were ruling Madras Presidency from 17th century itself. In Mysore, Hyderali, Tippu Sultan, the then rulers of Mysore died fighting the colonial powers and eventually Mysore Kingdom became a Princely state subservient to the British. Though the river Kaveri was flowing in Mysore state, the irrigation in the state was primarily dependent on Monsoon rains. Although the rulers of Mysore wanted to change that by building irrigation water supply facilities, they had to get permission for every small thing from the British delaying their progress. After a lot of letter exchanges with Madras, the agreement of 1892 was imposed on Mysore Kingdom. With that agreement, Mysore was made to pay for fighting the Colonial forces!

The gist of the 1892 agreement
Krishna, Kaveri and Tungabhadra were the rivers flowing from Karnataka to the then Madras Presidency. Being a lower riparian state, Madras state was making use of these waters for centuries. Hence several restrictions were imposed on Mysore to not disturb the existing availability of water with Madras state. Some of the them were:
Such biased rules literally broke the neck of Karnataka’s irrigation projects. At the same time, no such restrictions of any kind were imposed on Tamilnadu. It was even allowed to increase it’s area of irrigation without any interruptions. This is the beginning of a long journey of injustice to the state of Mysore and it’s people who are experiencing the effects of this agreement to this date.

The agreement of 1924
In reality, the 1892 agreement was made applicable to all the rivers flowing in the state of Mysore. Accordingly, the state of Mysore applied for permission to build a dam at Kannambadi as per the 1892 agreement. Madras however, refused to give its consent for this move. The relentless efforts of Nalvadi Krishnaraj Vodeyar, the then king of Mysore along with his chief engineer Sir M Vishweshvaraiah resulted in the agreement of 1924 between Mysore and Madras states.  The agreement was signed for a period of 50 years from 1924.  As the agreement was letting Mysore to go ahead with the construction of Kannambadi dam, it signed the agreement although it was heavily biased towards Madras. The agreement also stipulated that Mysore was not to increase its area under irrigation more than 110,000 acres beyond what was already existing, while the same cap for Madras Presidency was pegged at 301000 acres! Madras was given a free hand in building any number of dams in it’s territory and Mysore was also allowed to build a matching dam with a capacity 40% lower than that of the dam built by Madras!

At the time of independence, the state of Mysore was expecting that all these unfair and biased agreements will go away with British. Unfortunately, Mysore didn’t get any respite from the unfair agreement of 1924. Mysore tried starting a couple of new irrigation projects post-independence.

Roadblocks for Karnataka even in Independent India!
Yes, when Karnataka sought the permission of Government of India to start these new projects, the central govt replied saying “First get permission from Tamilnadu! Resolve your conflicts with them and then come back! ” How can anyone believe that Tamilnadu will give permission when it had opposed the very construction of Kannambadi itself ? Why should we seek Tamilnadu’s permission? Is Karnataka a princely state of Tamilnadu? Karnataka went ahead and built 4 dams in it’s territory without worrying much about permission of Central or Tamilnadu governments. The reservoirs that came up as a result were Hemavathi, Kabini, Haarangi and Suvarnavathi. The very construction of these reservoirs has led to the present day conflict of Kaveri river water sharing.
.
Tamilnadu, over several years discussed this issue with Karnataka and when Karnataka didn’t relent to it’s pressure tactics, went to the Prime Minister and complained. Later, a private organization called “Tamilnadu Kaveri Neerappasan Vilaiporulugal Vivasaayigal Naala Urimai Podugappu Sangam” approached the court with a complaint. Even the government of Tamilnadu filed a case in the court seeking to form a tribunal to settle this matter. After reviewing the matter, the honourable Supreme Court of India as per article 262 of the Constitution directed the Union Government to form the The Cauvery Water Disputes Tribunal and Union government obliged by forming the same in 1990.