The 2007 final judgement was a decisive end to the Kaveri river water sharing dispute as Kannadigas felt it puts a final nail into the coffin of 200 years of oppressive and unjust policies that denied Karnataka it's fair share of water. So, what happened at last? What is the way forward to resolve this dispute? Let's see. 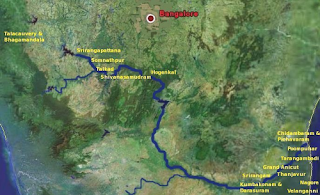 When Tamilnadu was going to the Prime minister or the Supreme court with a demand to form a tribunal in 1970s, it's argument of injustice lacked strength as it was solely centered around one argument i.e Karnataka is not abiding by the agreements of 1892 or 1924. Immediately, Karnataka used to corner Tamilnadu arguing that those colonial era agreements were imposed on it by the British and holds no sanctity after India's independence. Had courts and central governments agreed to Karnataka's arguments, the whole dispute would have died down then and there, but Tamilnadu cleverly interleaved the step of Karnataka building 4 dams in it's territory with it's earlier accusation and made it look like Karnataka is one adamant state that cares two hoot for it's neighbours and is usurping all the waters of Kaveri. It pleaded the center and the courts to form the tribunal to settle this matter. It won't be wrong to say that it also made sure that with it's unjust and unfair demands, the talks with Karnataka were made to fail to pave the way for forming the tribunal.
"All previous attempts to talk and resolve the issue with Karnataka have failed and hence please instruct the Union government to form a tribunal to resolve this dispute.", this was the powerful one line argument Tamilnadu used when it went to the Supreme court seeking to form a tribunal. When Union government was about to form the tribunal, Karnataka could have got justice had it put a condition  saying no state can claim prescriptive right over the flows of river Kavery on the ground of heritage rights and hence the tribunal should scrap all the existing agreements and look at water sharing and identifying irrigation areas afresh. Karnataka failed to do so when the tribunal was formed and consequently tribunal's interim and final judgements have given a death blow to it.  When the tribunal started it's inquiry, Karnataka tried putting the above argument, but it was too late. The tribunal rejected Karnataka's claim saying "Let's ignore historical injustices and base our inquiry on current day data of irrigation area, amount of water used, number of crops grown by both the states. This was a fatal blow for Karnataka as Tamilnadu was ahead of Karnataka on most of these parameters due to the very facts the tribunal tried rejecting, i.e historical injustices meted out to Karnataka! Once this was decided against the wishes of Karnataka, what was remaining was just issuing orders allocating water based on the existing irrigation areas of each state and you know what that meant for Karnataka! This was the real victory of Tamilnadu.

What is the role of the Court?
The constitution of India talks about Adjudication of disputes relating to waters of inter-State rivers in article 262 which clearly says the subject of interstate river water sharing dispute is out of it's purview.

262. (1) Parliament may by law provide for the adjudication of any dispute or complaint with respect to the use, distribution or control of the waters of, or in, any inter-State river or river valley.

(2) Notwithstanding anything in this Constitution, Parliament may by law provide that neither the Supreme Court nor any other court shall exercise jurisdiction in respect of any such dispute or complaint as is referred to in clause (1).

The role of tribunal!
Whenever a water sharing dispute arises between states, it was advised to form a tribunal to resolve the dispute using the Inter - State River Water Disputes Act 1956. Using this act seven tribunals have been setup so far and Karnataka has been a party in five of them! Does these tribunals refer to any national policy to resolve such disputes? Does India have any national policy? If we try to look for an answer to this question, all we get is a record called  national river policy, but surprisingly it doesn't anything about sharing river between states ! There are no clear formula defined to address distress situation! So, what does Kaveri tribunal say about distress formula? All it says is in distress season, share the water accordingly! If the solution was so simple, would we have landed up where we are now ? How will we share in times of distress without a clear formula? Tribunal answers this question by asking the parties involved to go for appeal. So, the crisis is forever!

What's the fate of Karnataka next?
The Kaveri tribunal has already given it's final judgement in 2007 and it's just waiting for the center to publish it in it's gazette and believe me that day is not too far.  All our protests will fall on the deaf ears just the way it is happening now after CRA headed by the prime minister ordered to release 9000 cusecs of water every single day without reviewing the ground realities and then sent a team to review the ground realities to douse the fire of protests. There are real possibilities that any future protests against decision published in the gazette will become illegal and may invite the wrath of the courts ! Once published in the gazette, everything should proceed as per the rules stipulated there and any attempt to defy those orders would get equated to sedition! Karnataka going to the court to apologise on the charges of contempt of court may become a regular affair after that !

How do we resolve the Kaveri dispute?
Looking at the history of the dispute, it is very clear that it's not a matter to be resolved by the court. This is a political problem requiring a political solution. We have to leave behind history and historic claims. Arguments like "We are already using the water and hence we  will have the rights forever" should be rejected outright. The final judgement of the tribunal which bases it's judgement on such argument should be rejected and we should press for a national river water sharing policy to be designed at the earliest. The new policy should decide the amount of irrigation area after looking into the whole basin area, it's geographic composition, the rain and famine data of the whole basin and form a policy that is fair and just for all riparian states.

The federal system needs a correction!
People in India believe that democracy is all about majority. Majority decides how the system should be. A classic example is the belief to make Hindi as the sole administrative official language of the union on the grounds that it is the spoken by majority! Such flawed policies result in people speaking minority languages would get reduced to the stature of second grade citizens and one fine day, it may even make these people go extinct. The structural asymmetry in representation of each state at the level of central government is also a big problem. The current framework of deciding number of MPs for each state based on their population has literally silenced the voices of smaller states. This should be changed to give equal representation to all constituents of the federation. Democracy driven on "might is right" philosophy will sound a death bell to a state in India without it's consent. India needs to move towards restructuring it's model of governance to become a true federation giving equal status to all constituents on all matters.

Time for a regional party in Karnataka!
The tribunal was formed under the V P Singh government where DMK was an ally. Even today, when prime minister ordered Karnataka to release 9000 cusecs of water without first looking at the ground realities, people suspect it was calculations of survival of his coalition government that made him do so. The way our present government or all previous governments run by national parties behaved in this matter, it is very evident that all their allegiance towards the state is a big farce. At the last moment, they will release water giving lame excuses like " High command said so", "Court's orders can't be defied".  If Karnataka wants to muster enough muscle to sit and negotiate things on an equal footing with others at Delhi and elsewhere, it must vote for a regional party that can safe guard the interests of the people who have voted them to power. It's time for a regional party to arise and tilt the power balance in our favour.